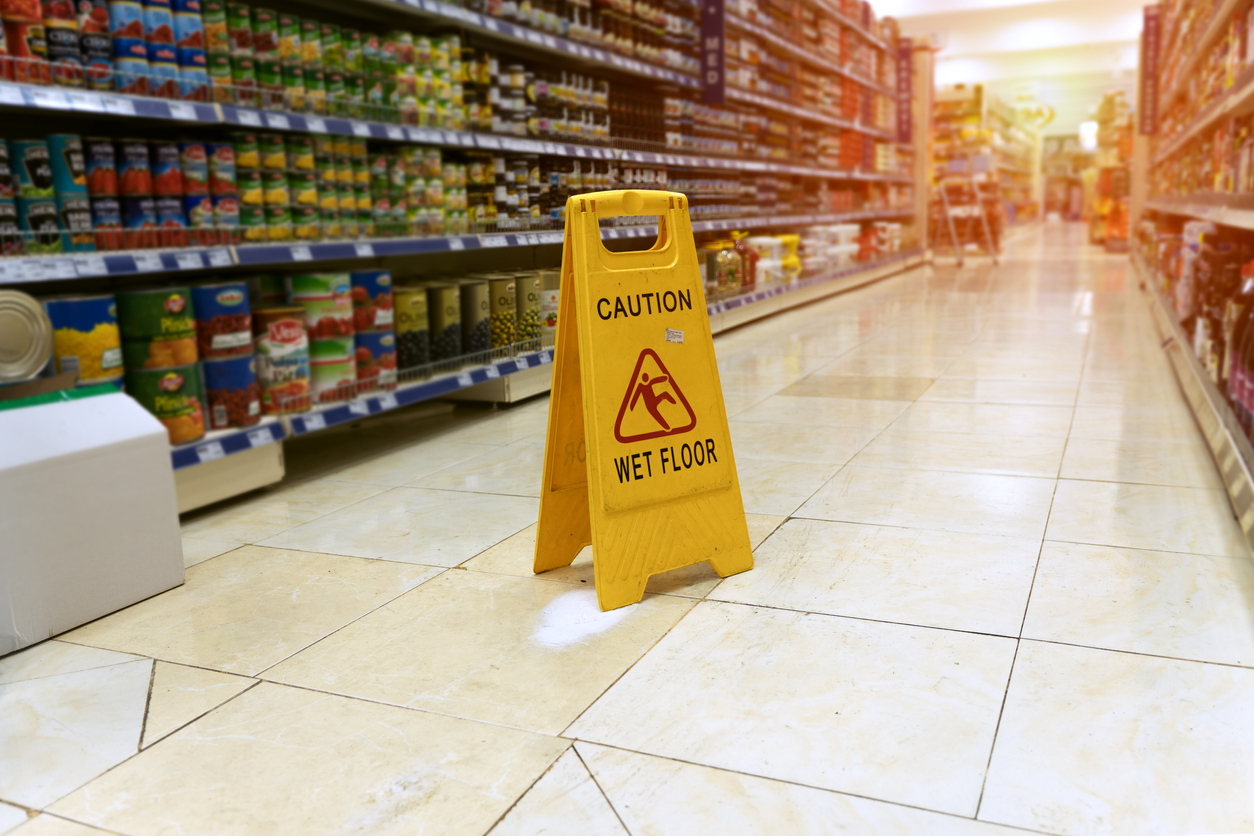 Episode 27:  In today’s episode, Jeff Roberts will discuss premises liability.  As a personal injury attorney in Calloway County, he’s handled many of these cases over the years.  In basic terms, premises liability claims can arise when someone is hurt on another person’s or business’ property.

What Are Common Causes of Premises Liability Injuries?

You may be familiar with an item falling from an overhead shelf and hitting someone in an aisle, for instance at Lowe’s or Home Depot.  This could also include a customer slipping on a wet or slippery surface in a grocery store (i.e. Kroger or Dollar Store).  The liquid could be from a punctured dish detergent or other type of fluid which leaked out onto the floor.

This could also happen at a personal residence.  One example would be if the railing on a deck gave way causing someone to fall and sustain an injury.  The injured person would file a premises liability claim against the homeowner’s insurance.

Businesses are starting to take additional precautions to protect patrons by roping off the aisle being stocked overhead and, in addition, the adjoining aisle to prevent an item from accidentally being pushed off the other side of the shelving.

Can a Customer be Held Responsible?

Yes, for instance if the store has posted signs asking customers to have a store employee retrieve overhead items, but the customer ignores the signs and is subsequently injured, the store may be able to win against a premises liability claim.

In Kentucky, jurors can divide the fault between the business and customer.  It’s a legal concept known as pure comparative fault.  So, if a jury decides the patron was 30% at fault, the customer would be responsible for 30% of the damages (i.e. medical bills, etc.).

Improper Training Opens the Door for a Premises Liability

There is specific training a person has to complete before they operate machinery, such as a forklift, skid steer or other equipment.  Should an employee cause an injury or damage to a patron or his/her property, the company may be liable for premises liability.  The training is there not only for operational knowledge, but for safety purposes.

A business may be held liable for accidents and/or injuries occurring in its parking lot.  One of the key factors is how long the “hazard” has existed.

Jeff explains that should a customer spill liquid, such as oil, and 2 minutes later someone else comes by and slips on the oil, there is a likelihood the jury wouldn’t hold the store or business liable.  They hadn’t had time to remedy the situation or rope it off.  Now, if it’s a repeated issue, or was noticed but ignored by store employees, the business may be held liable.

It’s not uncommon for stores to attempt to shift the blame onto the injured customer.  Again, comparative fault could reduce their liability.  However, your attorney may be able to secure footage from the video cameras throughout the store.  Unfortunately, if the injury is not reported and the victim doesn’t hire an attorney, the video footage may no longer be available.  Many video systems record over the existing footage.

An attorney can quickly notify the business to preserve and/all evidence, including the video footage.  If the company intentionally destroys or “accidentally loses” the video, Kentucky law allows the judge to inform the jury the it’s okay to presume the video would have been favorable to the injured shopper.

Jeff comments liability during winter conditions often involved a reasonableness standard.  There’s not a “bright-line rule” when it comes to premises liability claims during the winter.  It’s more likely that liability would exist if the situation has not been remedied over time, such as a parking lot that hasn’t been scraped for days or a defect causing a hazard that goes unaddressed by the business.

Stores should place safety mats at the entrances of the business during poor weather conditions, such as rain, snow, sleet, etc.  These mats can trap and retain water before the liquid causes a slip and fall hazard.  While a dangerous condition may still exist, at least the business is making some type of effort to protect its patrons.

Many manufacturing facilities in Western Kentucky store and use chemicals that can cause respiratory problems, if inhaled.  When a leak occurs, any employee harmed has the right to file a workers’ compensation claim.  However, if the leak were to cause problems for people in the general area, or someone doing business onsite, there may be grounds for a premises liability claim.

The business would have to be proven negligent in the care and/or storage of the hazardous chemical.  If the company new of the leak and refused to take actions to resolve the issue, this could establish negligence.  If the leak occurred without the company’s knowledge, it may be more difficult to assign the responsibility for the damages caused by the leak.

Have Questions about a Possible Premises Liability Claim?

Jeff offers a free consultation for people who have questions about this type of legal issue.  There are situations that may actually be negligent.  At the same time, there’s a possibility the facts don’t actually lead to a premises liability claim based on negligence.  This determination should be left to an attorney, so feel free to contact his office to discuss your concerns.