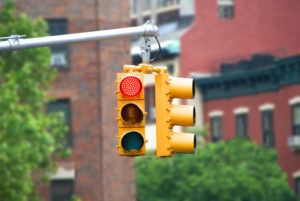 Intersections are among the most dangerous areas of the road.  If you think about it, you probably travel through hundreds of them each week.  A recent western Kentucky newspaper reported an intersection wreck involving 3 cars.

In this collision, the first car was struck by the second car and they collided with a third car, which was sitting at the intersection.  Even if you’re not in one of the cars involved in the primary collision, this example proves how other vehicles can also be at risk.

Common Causes for Collisions at Intersections

As an experienced, western Kentucky personal injury attorney, I’ve handled hundreds of cases involving automobile accidents at intersections.  Given the various angles of impact, the injuries can be quite severe.  Many of the collisions result in neck and back injuries.

The lateral forces resulting from a side-impact can easily cause the head to snap to the side or at another angle, even if the torso is restrained by seat belts.  This sudden whipping of the head can stretch ligaments, compress or rupture vertebral disks, and even result in a broken neck leading to paralysis or even death.

Should You Go to the Hospital?

The answer is, it depends.  If you are injured or are feeling any pain shortly after a collision then you should definitely go to the hospital.  However, often times a person’s adrenaline is pumping and there attention is focused elsewhere, so they do not notice an injury until a few hours later.  Sometimes it is a day or two later before the injury appears.  If that occurs, you should visit your family doctor or an immediate care center shortly after you realize you have been injured.   When you go for medical treatment, make sure you let the provider know about the collision.

As an automobile accident attorney with years of experience, I can tell you the insurance companies are going to use a delay in seeking medical treatment as a reason to deny later medical expenses.

Especially in this situation, with an intersection wreck involving 3 cars, the angles and the forces are going to result in a few doctor and/or chiropractic visits.  It’s possible that the victims may also need to take some time off from work.  By going immediately or within a few days to a hospital, clinic, doctor’s office or even a convenient care location, you’ll have important medical documentation, which will provide valuable evidence of your injuries.  This will help to avoid delays in paying your medical bills and any lost income.

If you need advice regarding an automobile collision, contact our office at (270) 753-0053.  We offer free consultations and if needed, we can meet with you at your hospital, rehabilitation center or home.